We have two fun Friday features for you today. First up is Real Cat Webster, who has an “eary”  word to share. After that, it’s on to Friendly Fill-Ins! 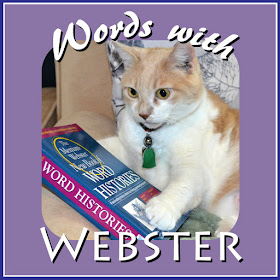 Hi, everybody! It’s me, Real Cat Webster. Welcome to Words with Me. Today’s word is “Henry’s pocket.” I picked this word because I just thought it was interesting. It is also not in the dictionary, which makes it kind of hard to find its origins or give examples.

But anyway, the important thing is that Henry’s pocket is that little pouchy thing on the bottom part of a cat’s outer ear. It’s also called the “cutaneous marginal pouch,” but “Henry’s pocket” is so much more fun to say. Some kinds of dogs and other animals have these little ear pouches too.

Humans like to name things, so they have named this little pouch, but none of them seem to know for sure what its function is. One possibility is that the pouch helps cats detect high-pitched sounds. No one seems to know why it’s called Henry’s pocket either. We have no idea who named it that or when. All in all, Henry’s pocket is kind of a mysterious thing.

One thing that is not so mysterious is that nasty little parasites like to hang out in Henry’s pocket, so you and your vet should keep an eye out for them! 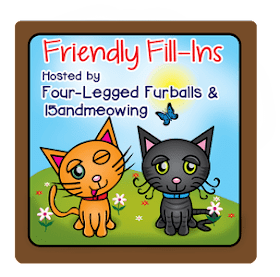 And now it’s time for Friendly Fill-Ins, from 15andmeowing and The Four-Legged Furballs. Real Cat Paisley took on the first two this week, and old SoLT did the next two.

Real Cat Paisley’s answers:
1. I have faith in the Cat Food Gods because they eventually make sure I get some tasty food. Sometimes it takes a while, though. Please see my answer to #2 for an example.

2. Yesterday, I finally got some tasty food after several days of icky food. The gods must have slept through the first part of the week or something.

Old SoLT’s answers:
3. My favorite place to be is sort of theoretical because I almost never get to go there . . . but I love the beach.

4. If I was granted one wish, it would be to live closer to the shore so I could enjoy walking on the beach more often than once a decade.
Unknown at 3:00:00 AM
Share